I Love Steve Levy and Paris in the Springtime (Yes, Your Heart Can Be in Two Places)

Did you ever have one of those days when you wake up and say to yourself, “I fucking hate Paris.”  Yeah, me neither. 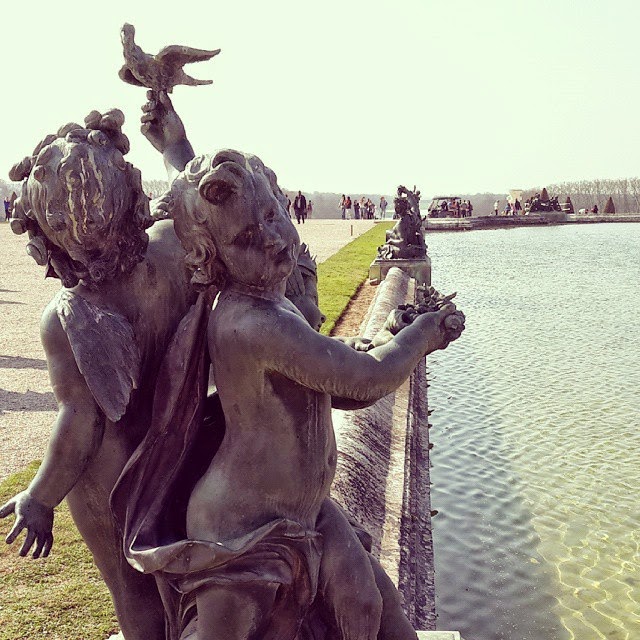 Well, I guess that’s not entirely true, because I’ve had my moments.  Like after I’ve eaten too much baguette with too much cheese, or after it’s rained every day for two weeks, or when I realize I left my lifelong friends in Philadelphia, along with my oldest son, and my parents, and my brothers, or when I tell myself I’ll set up my laptop at a café and watch the world go by, but I never actually do that because I’m afraid to, the same way I’m afraid to purchase anything at the outdoor markets when I'm alone, or practice the little bit of French I know, unless I have to.  There are the times I think the loneliest people in the world live in big cities, because you never feel more alone than when you are surrounded by people, and you are invisible.  And then there’s the Parisians.

In the past few days, my novel has grown to 10,330 words.  The sections on which I’ve been concentrating this week are nostalgic.  It’s a narration of moments and memories and things that have been frozen in time.  I’ve never been sure if art imitates life, or the other way around, but putting my narrator’s past in retrospect has forced me to remember moments of my own life as well, moments that were incredible, and those that didn’t seem so hot at the time, and other moments in between.

Like the trees blooming throughout Paris as I type this (literally coming to life before my eyes), it’s the everyday moments of my past that have worked their way front and center during my writing this week.  They’re things I don’t do anymore, and they weren’t spectacular when they happened, but now? < Le Pop! >

Nursing my second son in the wee hours of the night, alone and in the dark, in a white leather chair in the corner of his room, the trees and the stars just outside his window, his eyes closed, fists wrapped around my fingers, quiet gulps, thin pale milk on his lips, his brother asleep in the room next door.  Is it a conglomeration of memories?  Night after night, hours strung together to form one moving picture?  Or did it happen exactly like that?

Running - in the heat, up the hill toward Ridge Pike, telling myself I’m a machine; in the cold along the highway, gulping the winter air for stamina; six months pregnant just after 9/11, reminding myself how lucky I am, that I can still move this way, that I am alive; along the trail at Valley Forge on a day that was too cold for shorts, my legs red and burning but no turning back; with my running partner Kathy, along farm roads and blacktop, after she convinced me I should try running; at Valley Green, on the day of my junior prom.

Planting - my first house - digging and turning the soil in the flower beds and in the mulch circle around the tree on my tiny front lawn, a townhome, new construction, everything I planted there was beautiful.  Season after season, eleven years of impatiens and mums and pansies, and the tree growing taller until the top of it reached the top of the second floor windows, and I moved to a single home, and I thought I had accomplished something.  Because I had.

My red Ford Focus, in morning traffic on 422, kids successfully dropped at daycare, cigarette out the window, Howard Stern on the radio, eighty dials to go, payday.

Back deck barbecue, boys splashing in the pool, crickets chirping, building a fire, s’mores, a pug sniffing at my feet.

There are memories before these, and memories after.  But these are the ones that popped this week.  As a writer, it’s not my job to explain everything, just to observe it.

The week we moved to Paris, some sixteen months ago, The Hubs and I realized we didn’t own coffee mugs.  We walked along the Rue de Levis in the 17th Arrondissement, where we discovered our Fromagerie, and our Boucherie, and our Poissonnerie, and then of course, the Monoprix, where we picked up two matching vessels from which to chug our morning caffeine.  While writing this blog post, I took a break to refill my mug.  It slipped out of my hand and shattered.  I won’t attach symbolism or foreshadowing or any other literary term to this non-event, but now I need a new coffee mug, dammit. 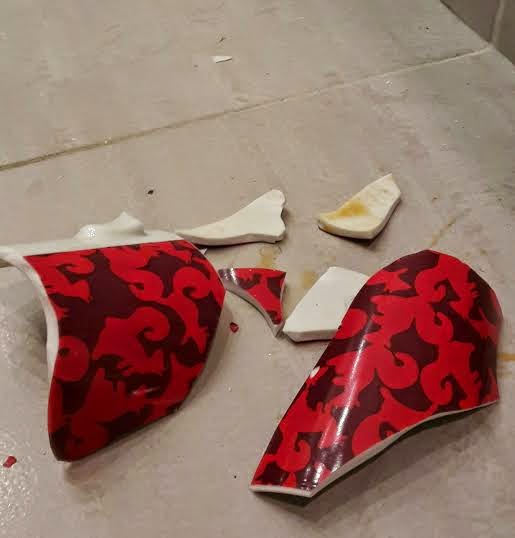 My point is this.  I mostly adore Paris.  And man, I love Paris in the Springtime.  < insert tiny French flag here > There are days when I’m here in Paris, and I think, what am I doing?  Why am I afraid?  Why haven’t I learned French?  I should go to the Louvre.  I should walk around Montmartre.  I should call up some girlfriends and drink wine and laugh until my stomach hurts.  I should grab a Velib and pedal through the Bois de Boulogne.  So I do those things, and they make me happy, and I eventually return home and cook dinner and embrace whatever family is here - my husband when he’s not traveling, my youngest son after sports practices, my older son when he can fly here on leave, my stepchildren on vacation, visitors who ask to stay with us, and even the occasional exchange student. 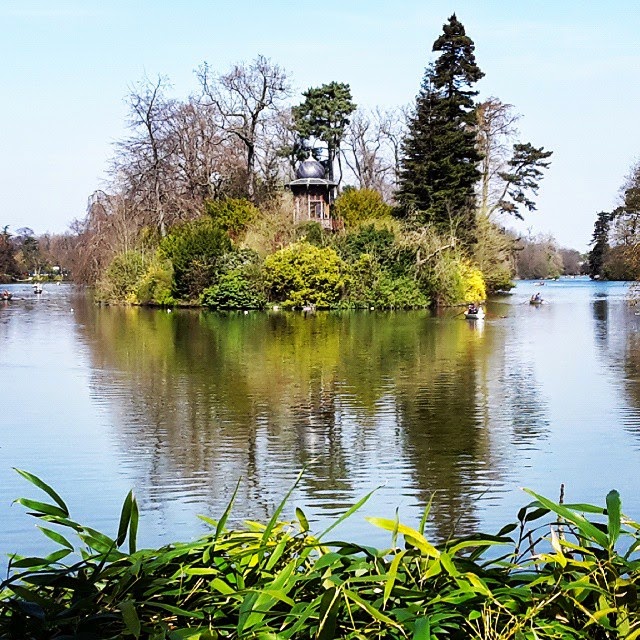 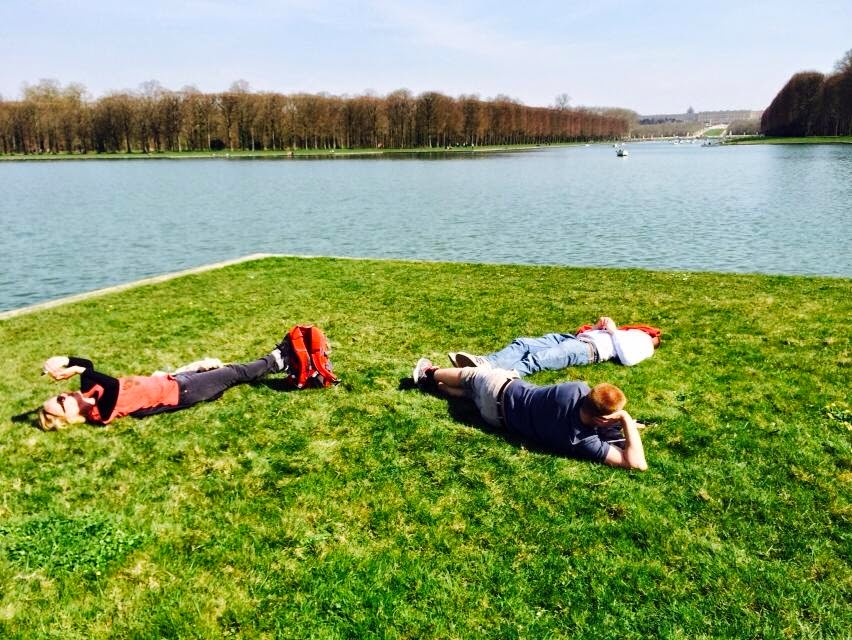 Sometimes I think Paris isn’t really my life.  It’s a little placeholder, a temporary respite, a dream assignment, a period in time that will pass too quickly and I’ll wonder what happened to it, and then I’ll be back in the USA, where I belong, planting flowers and running on blacktop and sitting in traffic and cooking on the grill, crickets and lightening bugs and stars and wind through the trees.

But it’s so much more than that.  Paris is my life.  I am here.  I am doing things.  I have friends, and my son has school, and my husband goes to work, and I’m writing a book.  Years from now, the memories I’m making in Paris will pop < le pop, le pop, le pop > …

Paris in Three Minutes - From Maxime Gaudet - Click for Vimeo

I stumbled upon this video yesterday and it choked me up, and I said to myself, Merde.  Someday, I'm going to miss this city.  Let's get out there and play the game, people!  :::collective locker room exit::: Clap, clap, clap!
Labels: Paris Writing
Location: Paris, France